After five years, I've moved the blog to a new platform. Just click the link above and bookmark the new site! Thanks for reading Grape Sense - A Glass Half Full

The Indiana’s Uplands region being declared an American Viticulture Area Feb. 12 is good news for all Midwestern wineries.

The U.S. wine industry is driven by tourism. For those who take wine seriously and want to learn more about wine, hitting up AVA-designated areas assures a level of serious winemaking and even quality.

The Ohio River Valley AVA is shared by Ohio, Kentucky, and Indiana. Kentucky has no other designated grape production area and Indiana did not until the Uplands announcement.

“It just kind of affirms what we already know that we have some excellent grape growing regions and they’re unique here in the Midwest,” said Bruce Bordelon, Viticulture Specialist at Purdue University. “The Uplands region is different than southwest Indiana. Posey County and Gibson County have different climate and soils. There really is a difference in the (grapes) that we grow and the quality that we get between regions. It’s those little minor differences that makes vintages special and make our varietal-labeled wines special.”

Oliver Winery, near Bloomington, IN., is one of the Midwest’s largest. With production in the 400,000-case range business is good. But Oliver embraced the Uplands news every bit as much as the other eight wineries in the Uplands.

“It allows us to qualify as a true viticulture area and raise the level of awareness that there is something special about this region,” said Kathleen Oliver, Executive Vice President. “Hopefully, we’ll be able to capitalize on that by saying there is something really unique about these wines. We are producing great quality wines; we can do it just like Napa and Sonoma. We are something special. And it gives us the opportunity to look for a more premium price.”

Jim Butler, Butler Winery also near Bloomington, spent nearly 10 years working to achieve the AVA designation. He agreed that Indiana has a niche with white Traminette and red Chambourcin wines that are grown throughout the Midwest and excel in the Uplands region. But he also sees other wines doing well and a future for more traditional plantings.

“Late harvest Vignoles and Vidal does wonderfully,” Butler said. “We’ve been doing Chardonnel. I think we’re going to see some more viniferas (think traditional wine grapes) planted. “It takes four years to plant a vine and then get your first crop. It’s going to be a decades-plus process to zero in on those varieties that are going to give us the product that we want.”

The 4800-square-mile Uplands AVA stretches from the Morgan-Monroe County line near Bloomington south to the Ohio River. The east-west boundaries run from Jasper in Dubois County to Knobstone Ridge near Starlight, overlooking the Ohio River Valley.

It's pretty simple but will be seamless for regular and occasional readers of this blog. I'm moving it to different software and a more easily identified URL. Or, you might call it taking advantage of what I've learned from five years of wine blogging!

This blog is written on a fine, and easy-to-use, software platform from Google - it's called Blogger. It has gotten many a blogger writing on many different topics a start in online writing. But there are more sophisticated programs out there which offer far more options.

On the business side, this blog has been about 'building a brand.' I've experimented a lot and know what gets hits here and how it has nicely complimented my newspaper column.

The move will have later this week or weekend. Unless you have Grape Sense bookmarked, most reader will never notice the URL change. Most of my hits come from Google searches and Facebook/Twitter postings. I provide a link in those social media postings so no one needs to remember or bookmark my address.

The new site will categorize the posts I've written to date - or nearly 700 of them. It will look different but be quite easy to navigate.

I will also leave a post at top of this blog for some time with quick easy direct to new site. Stay tuned for the arrival of the moving vans and my new home for Grape Sense!

French wine isn't all $1,000 a bottle. The crazy things that happens with French futures and the high-end Chateau wines from Bordeaux grab the headlines but there are plenty of tasty treats at all price points.

Here is a look at two wines, a red and a wine, which are pretty easy to find and both under $15. 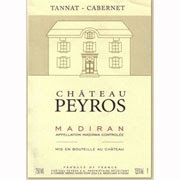 Chateau Peyros 2006 Madiran - This southern Bordeaux wine is probably best suited for a red wine drinker who want's to try an easily affordable Bordeaux. Madiran is the appellation area while the grapes are Cabernet and a grape that will be unfamiliar to some, Tannat.

Tannat is the dominant grape in the Madiran region and also found in Uruguay. There's also a little Tannat grown in Virginia and California. Indiana's Jim Butler, at Butler winery near Bloomington, recently told me he is planting some tannat.

Tannat is a grape that produces a tannic wine that is intended for aging. It's most often blended with Cabernet and the other more traditional Bordeaux grapes.

These are dark wines with big flavor and can be quite rich and wonderful. They can also be too dry, leathery, and off-putting. Any wine with a dose of Tannat probably needs decanting.

The Chateau Peyros is easy to find but definitely needs that decant. I tasted it after pouring through a good aerator but found it lacking much fruit. I searched a few online reviews and found many agreeing with my first impression. Those who let the wine open up certainly liked it more than those of us who opened and poured.

Its a nice wine. It generally gets good marks 90-ish from critics. But on consumer driven wine review sites the wine scores lower. It's hard to recommend this wine because many are not going to care for it. Some will even find it thin straight from the bottle. If you have the patience to decant a couple of hours or more and like trying the proverbial 'something different,' then Chateau Peyros is worth your try. 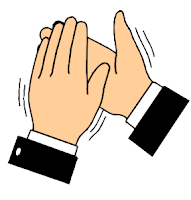 This is a really delightful Southern France white wine. Generally, classifying wines to the season is geeky-goofiness that just doesn't matter. I like to live by the rule that if you like it - drink it.

I prefer these crisp whites in the summer but really loved this one in mid February with pasta. The Beraud has an aluring nose that hints of mineral and bright citrus. 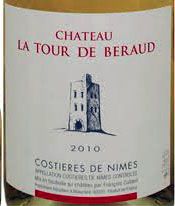 There seems to be a touch of peach and a little satisfying sour/tart characteristic on the finish. The wine is made from Grenache Blanc, Rousanne and Marsanne grapes - the classic Southern French wine grapes. These are great grapes and wine blends to try. And, the Southern Rhone and Languedoc regions are making some wonderful value reds and whites which taste far above their often meager prices.

Costieres de Nimes is southern most Rhone and often associated with the ancient Romans. Romans planted some of the original vineyards in the ancient area. 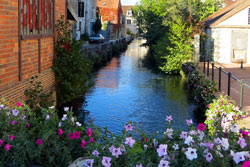 Click on photo to view photos taken during my wine travel

Howard Hewitt
I write an every other week newspaper column about wines under $25 and feature education aspects for the novice wine drinker. The column "Grape Sense" appears in 22 newspapers in Indiana, Illinois, and Michigan now reaching more than 300,000 homes monthly. I post those columns here and to the blog "Grape Sense."